Makalu Barun National Park and Buffer zone area (previously conservation area) was established in 1992. This park administered and managed by Department of National Parks and Wildlife Conservation. His Majesty's Government of Nepal and supported by The Mountain Institute's initiative, is an innovative conservation model that integrates protected area management and community development. 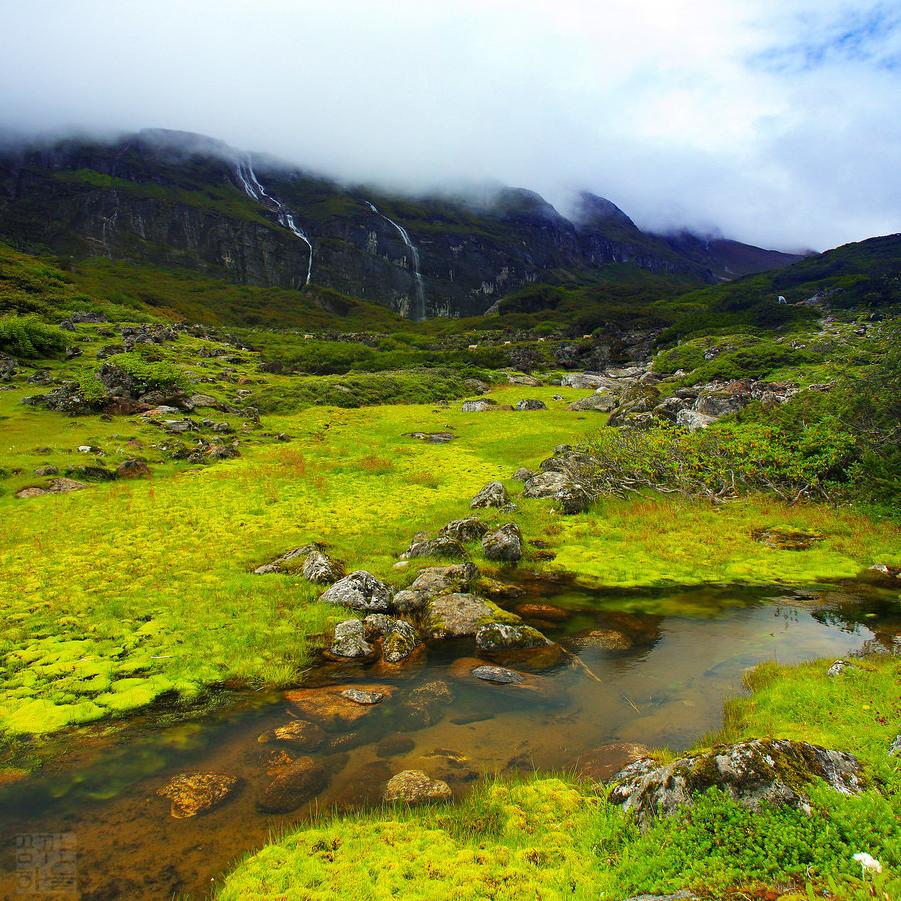 A new park management approach encourages local people to become actively involved in protecting the forests and natural resources upon which their lives depend, and conserving their own rich cultural heritage. Traditional resource management systems, such as community controlled grazing and forest guardianship, are being strengthened and low technologies introduced where appropriate.

Some 32,000 people of ethnically divers backgrounds live in the Conservation Area. The majority belong to various tribes of Rais and practice an ancient religion which reinforces harmony with nature. Shingsawas and Sherpas. Bhotia people originally from Tibet, live at higher elevations and carry on Buddhist traditions. A handful of other hill tribes including Gurung, Tamang, Magar, Newar, Brahmins, Chhetris and occupational castes live in the lower elevations. These people live in isolated villages much as they have for centuries. As farmers, herders and seasonal traders, their livelihoods depend heavily upon forest resources for animal fodder, fuel, food, housing materials, fertilizers, medicine and other creative uses, clothing spun from allo (nettles), paper made form lokta (daphne bark) and countless items made from bamboo including furniture, containers, baskets, musical instruments, raincoats, and aqueducts.

Most of the Makalu-Barun National Park is a remote wildness, with just two small settlements and seasonal herding in high pastures. Historically, few foreigners have visited the area except for the occasional climbing expedition. The incredibly steep topography and abundant monsoon rains (1000 to 4000 mm per year) of the eastern Himalayan support unusually diverse bioclimatic zones and a rich storehouse of medicinal and useful plants. Alpine pastures above 4000 m contain the religiously important dwarf rhododendron and juniper, aromatic herbs and delicate wildflowers, including 47 different varieties of orchids. Subalpine forests of fir, birch and rhododendron, and temperate stands of oak, maple and magnolia thrive between 2000-4000 m. Luxuriant orchids drape the chestnut and pine forests of the subtropical zone (1000-2000 m) and sal forests reach their northernmost limit within Nepal along the banks of the Arun (below 1000 m).

The park has 400 species of birds, including the spotted wren babbler and the olive ground warbler. These two species have never been seen in Nepal before. There are many wild animals including the endangered red panda, Himalayan black bear and the clouded leopard. Other wildlife found in the park are: ghoral, tahr, wild boar, barking deer, Himalayan marmot and weasel, common langur monkey and the serow.

The Arun River gushing through the park has around 84 varieties of fish including salmon.

Makalu-Barun area falls in the eastern Himalayan climatic regime where monsoon starts early (June) and stays longer than in west Nepal (until late September). The climate is generally described as monsoon type, where more than 70% of the precipitation occurs between June and September. Pre monsoon rain is common during the month of April and May, an important factor in biomes production. No reliable records of climatic data represent the entire area- Great variations in temperature and precipitation can be expected due to extreme difference in altitude, slope and aspect within the area.

Tha Makalu-Barun National park and Buffer zone headquarter is located at Murmidanda. Seduwa. A kerosene depot at Makalu Tourism Association as well as private lodgers in Tashingaou sales kerosene to all trekking groups including the porters. Makalu Tourism Association rent kerosene stoves and blankets for porters. The trekking group has to provide the facilities to the porters. There are four shelters built for the use of porters while they are inside the park. Neither the staff nor the porters should make fire inside the shelter as it is only for sleeping purpose.

Fly from Kathmandu to either Lukla, Phaplu, Lamidanda, Bhojpur and Tumlingtar airstrips, and then trek to reach the park.

Most trails are quite rocky, and become slippery after rain or overnight freezes. Until April or May, winter snows generally stay on the passes and on high altitude trails approaching shershong. One particular hazardous area is the trail between Mumbuk and Yangle Kharka, an area of unstable and dangerous Rock fall. Trekkers in this area should move quickly and watch for falling rocks. Mountain sickness can also be a serious risk if elevation gains are rapid without proper acclimatisation.