The jungle of Nepal

This is the first national park of Nepal established in 1973 to preserve a unique ecosystem. The park covering a pristine area of 932 sq. km is situated in the subtropical inner Terai lowlands of southern central part of Nepal. The park has gained much wider recognition in the world when UNESCO included this area on the list of World Heritage Site in 1984. 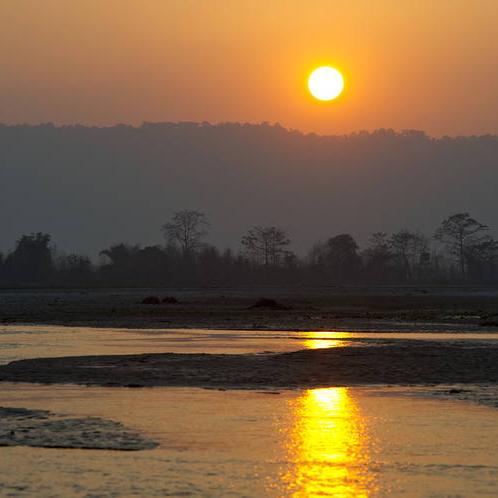 Formerly, the Chitwan valley was well known for big game and was exclusively managed as a hunting reserve for the Rana Prime Ministers and their guests until 1950. In 1963, the area south of Rapti was demarcated as a rhinoceros sanctuary. In 1970, His late Majesty King Mahendra had approved in principle the creation of Chitwan National Park.

The park consists of churia hills, ox-bow lakes, flood plains of Rapti, Reu and Narayani rivers. The Churia hill rises gradually towards the east from 150 m to over 800 m. The lower but most rugged Someshwor hills occupy most of the western portion of the park. The flood plains of Chitwan are rich alluvial. The park boundaries have been delineated by the Narayani and Rapti rivers in the north and west, and the Reu river and Someshwor hills in the south and south-west. It shares its eastern border with Parsa Wildlife Reserve.

The Chitwan valley is characterized by tropical to subtropical forest. 70% of park vegetation is predominantly Sal forest, a moist deciduous climax vegetation type of the Terai region. The remaining vegetation types include grassland, riverine forest and Sal with Chirpine, the latter occurring at the top of the Churia range. The riverine forests mainly consists of khair, sissoo and simal. The simal is with spiny bark when young and develops buttress at the bottom in older stage. The grasslands form a diverse and complex community with over 50 species. The Sacchrum species, often called elephant-grass can reach 8 m in height. The shorter grasses such as Imperata is useful for thatch roofs.

There are more than 43 species of mammals in the park. The park is specially renowned for the protection of the endangered one-horned rhinoceros, tiger, gharial crocodile along with many other common species of wild animals. The estimated population of endangered species of animals such as gaur, wild elephant, four horned antelope, striped hyena, pangolin, gangetic dolphin, monitor lizard and python, etc. Some of the other animals found in the park are samber, chital, hog deer, barking deer, sloth bear, common leopard, ratel, palm civet, wild dog, langur, rhesus monkey and many more.

There are over 450 species of birds in the park. Among the endangered birds found in the park are Bengal florican, giant hornbill, lesser florican, black stork and white stork, Few of the common birds seen are peafowl, red jungle fowl, and different species of egrets, herons, kingfishers, flycatchers and woodpeckers. The best time for bird watching is March and December.

More than 45 species of amphibians and reptiles occur in the park and some of which are marsh mugger crocodile, cobra, green pit viper and various species of frogs and tortoises.

The park is under the tropical monsoon climate with relatively high humidity. The winter, spring and monsoon are the three main seasons. The cool winter season occurs from October to February. The spring begins in March and is soon followed by summer that ends in early June. The summer days are typically hot with 30°C on average day temperature. The monsoon usually begins at the end of June and continues until September. The mean annual rainfall is about 2150 mm and during this time of the year rivers are flooded and most of the roads are virtually closed.

The display at the visitor centre at Sauraha provides fascinating information on wildlife and conservation program. The women's user groups' souvenir shop offers a variety of handicrafts and other local products for gifts and souvenirs.

Elephant safari provides opportunity to get a closer view of the endangered one-horned rhinoceros. One may also get a glimpse of the elusive Bengal tiger. The Elephant Breeding Center at Khorsor, Sauraha gives you information on captive elephant and the calves born there.

The museum at Kasara, the park headquarters, has informative displays- Near the HQ visitors can see Bikram Baba, a Hindu religious site of archival value. A short walk (1km) from the park HQ will take you to the Gharial Breeding Center, which is also home to the Marsh mugger and number of turtles.

Inside the park, there are 7 resorts run by park concessionaires that can provide lodging and access to wildlife activities. Various resorts and lodges situated outside the park also offer variety of services.