The area of the Langtang National Park extends from 32 km north of Kathmandu to the Nepal-China (Tibet) border. Situated in the Central Himalaya, this park is the closest one to Kathmandu. Langtang was designated as the first Himalayan National Park in 1970-71, and was gazetted in March 1976. While the main reason for the park is to preserve the natural environment, an equally important goal is to allow local people to follow traditional land use practices that are compatible with resource protection. 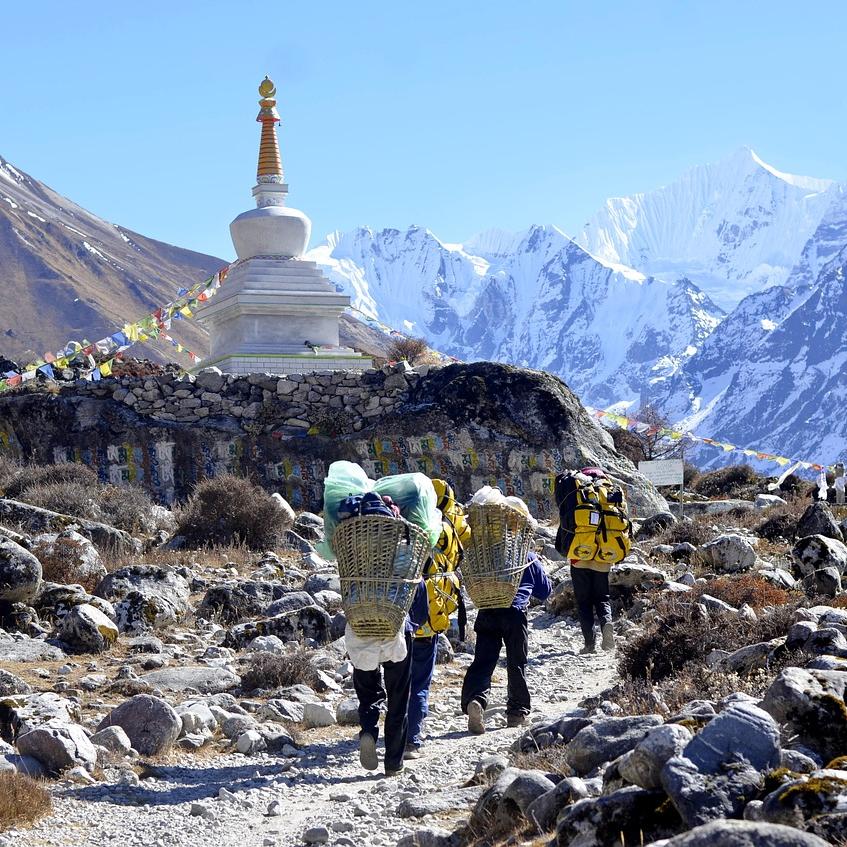 Langtang National Park encloses the catchments of two major river systems, the Trisuli River in the west and the Sun Koshi River in the east.
The complex topography and geology together with the varied climatic patterns have enabled a wide spectrum of vegetation types. These include small areas of subtropical forest (below 1000 m) Oaks, chirpine, maple, fir, blue pine, hemlock spruce and various species of rhododendron make up the main forest species. Above these alpine scrub and grass give way to rocks and snow.
This national park provide habitat for a wide range of animals including wild dog, red panda, pika, muntjac, musk deer, Himalayan black bear, Himalayan tahr, ghoral, serow, rhesus monkey and common langur. The Trisuli-Bhote Koshi River forms an important route for birds on spring and autumn migrations between India and Tibet.

Culturally the area is the home of several ethnic groups. The majority of people are Tamang, an ancient Nepalese race. The Tamangs, traditionally farmers and cattle breeders, are especially well known for their weaving. Their religion is related to the Bon and the pre-Buddhist doctrines of Tibet. Today this religion has merged with the newer teachings of Tibetan Buddhism. The Helambu area north of Kathmandu, has many scenic villages inhabited by Sherpas and Tamangs who emigrated from Tibet.

Over the centuries the dependence of people on natural resources has influenced the environment. Their settlements, cultivation patterns, livestock grazing, and daily use of resources which, in combination with the diversity of flora and fauna and views to the Ganesh Himal, make Langtang an attractive national park.

The Langtang Valley, offers an opportunity to explore villages and gompas (monasteries) as well as glaciers, with magnificent views of the mountains. This is the most visited part of the park and for those who do not wish to camp, accommodation in lodges is available.
Gosainkunda, an area of high altitude lakes, is believed to have been created by Lord Shiva. Thousands of Hindu pilgrims visit these lakes during Janai Purnima festivals in the month of August.
Along the trail from Sundarijal and Dhunche to Gosainkunda outstanding views to Langtang Lirung (7246 m) and Himal Chuli (7864 m) are visible. The route from Dhunche passes a Buddhist monastery, Sing Gompa.
An alternative route from the Langtang Valley to Kathmandu crosses the Ganja La pass (5106 m). This pass is difficult and dangerous when snow covered. It is generally open from April to November, but unusual weather can alter its condition at any time. Essentials for crossing the Ganja La are a tent, alpine equipment, food and fuel as well as guide who knows the trail.
The Helambu circuit, from Sundarijal to Tharepati, barely enters the national park but is nevertheless an interesting route passing through several Bhotia villages and without ascending to more than 3400 m. From this trail it is possible to connect with Gosainkunda and eastern parts of the park (Panch Pokhari).

From mid-October to mid-December and from mid-February until mid-April the weather is usually clear but cold at higher elevations. From mid-April to mid-June, it is warm but often cloudy with thunder showers, spring flowers are at their best. Summer monsoon lasts until the beginning of October. During the winter months daytime temperatures are low and snow may occur even at low levels.

The park Headquarters is at Dhunche, and a check post at Ghora Tabela. All visitors must stop at either place to pay an Entrance Fee, and are required to show your passport.

Be sure to keep your Entry Permit as it might be checked later by the park guards. Further information and advice is available at the park HQ. and Entrance Station.